2019/9/9
The Government of Japan and the people of the Kauvai, Ha’apai islands celebrated the completion of their new community hall constructed under Japan’s Grant Assistance for Grass-Roots Human Security Projects, on Wednesday 4, September 2019. His Excellency Mr. Tetsuya Ishii, Ambassador Extraordinary and Plenipotentiary of Japan handed over the new community hall during a handover ceremony at Ha’ano island.

Lord Tu’iha’angana, Estate Holder of Ha’ano attended the ceremony along with Lady Tu’iha’angana. Present also was Mr. Mo’ale Finau, People’s Representative for Ha’apai Constituency Number 12. Government Officials from the Governor of Ha’apai Office, District Officer and Town Officer and the people from the islands of Kauvai, Ha’apai.

His Excellency Tetsuya Ishii was pleased with the completion of the new community hall for Kauvai islands which is located at Ha’ano. “I am confident that this facility will become a vital part of your society. The hall will serve as a beacon of hope for the people of Kauvai, through various training programs and outreach activities.”

“It will also serve as a steady shelter during times of disaster as well as a place for the distribution of basic needs after a disaster,” stated the Ambassador.

Lord Tu’iha’anaga acknowledged with gratitude the assistance from the people and Government of Japan. He said the new hall will indeed accommodate the community’s activities, but more importantly the hall will be an evacuation center during times of natural disasters. The project also installed a new water tank beside the hall, and was given a new diesel generator. 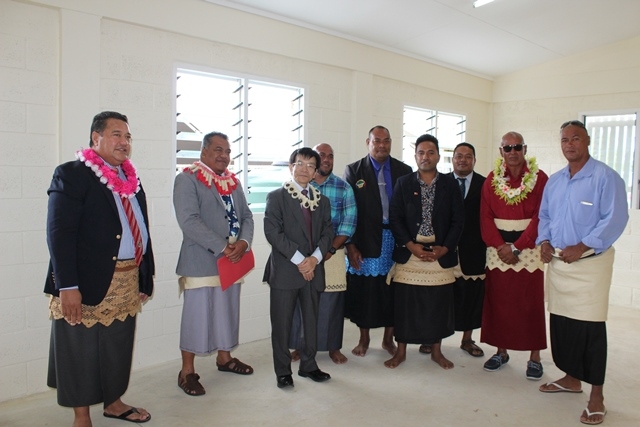 GGP handover a new community hall for the people of the Kauvai
Press Release
For further information on the project, please click the above.