2019/9/2
The Embassy of Japan in collaboration with Japan Foundation invited to Nuku’alofa one of Japan’s contemporary artist and origami expert, Ms. Midori Furze in a cultural exchange program that demonstrated and taught origami skills to many, in Tonga.

H.E. Mr. Tetsuya Ishii, Ambassador Extraordinary and Plenipotentiary of Japan to the Kingdom of Tonga welcomed Ms. Midori Furze and her assistant artist Ms. Miho Higuchi in their first ever origami workshop in the kingdom. Origami is a traditional art form developed in Japan over many centuries. “It is also popular as a leisure activity where you can create a new world with just a single piece of paper at any moment, in Japan, Origami is enjoyed by every age group, from Kindergarten children to elder people, because the art form also ranges from easy to elegant crafting of paper folding,” said Ambassador Ishii.

The special needs students of the ‘Ofa Tui mo ‘Amanaki Centre were excited to watch and learn origami paper folding straight from the experts, in a workshop held on Wednesday morning, 28 August. Mrs. Tiulipe Peleketi, Coordinator of the ‘Ofa Tui mo ‘Amanaki Centre expressed highest appreciation as the new skills in origami paper folding enlighten and brought joyous experience to her students. Alike many students and Teachers at Tonga High School, the Government Primary Schools of Longolongo and Fasi mo e Afi, were amazed in learning the hidden technique of paper folding into the shapes of a heart, a water-bird, samurai helmet, triangular bipyramid, and a rose. Two workshops were also held for the general public at the conference room of the Embassy of Japan.

A reception concluded the cultural exchange program was hosted by the Ambassador Ishii at his residence on Thursday evening, 29 August, and was attended by Hon. Losaline Ma’asi, Minister for Agriculture, Food and Forestry. Hon. Ma’asi enjoyed an origami activity of folding a paper bracelet and said that “it is a privilege to be exposed to something new, something relaxing and enjoyable.”

“I realised that origami is something that can take away the stress from us, when we feel the comfort and enjoy this small activity that with coordination can help with strengthening the skills and patience, reasoning,” she said.

The Embassy of Japan acknowledged the collaboration from those who were involved in the origami demonstration and workshop before Ms. Midori and Ms. Miho departed Nuku’alofa on Friday afternoon. 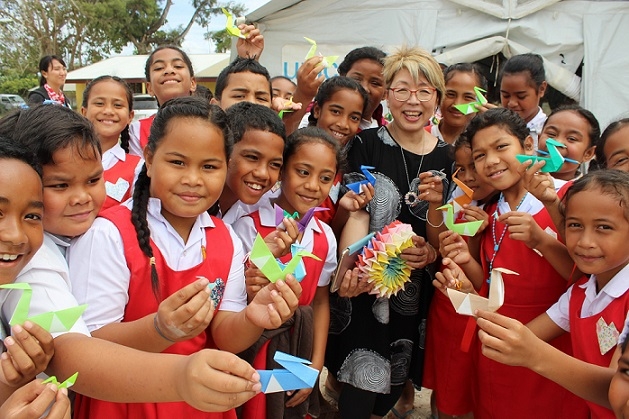 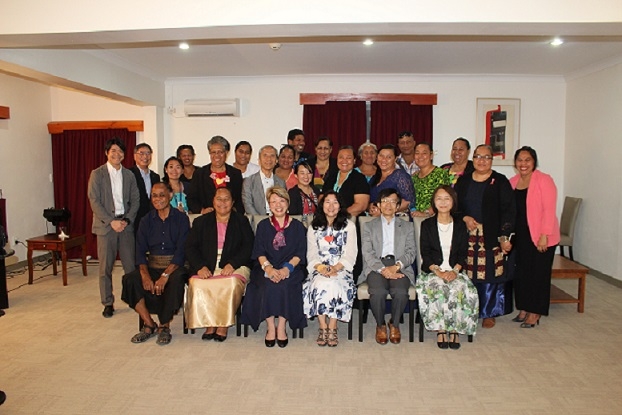