2019/12/11
The Grant Contract formalizing the Government of Japan’s assistance to four new Grassroots Human Security Projects were signed between H.E. Mr. Tetsuya Ishii, Ambassador Extraordinary and Plenipotentiary of Japan in Tonga and respective recipients on Tuesday, 10 December 2019 in Nuku’alofa.

Hon. Tevita Lavemaau, Minister for Finance and Minister for Revenue and Customs attended the signing ceremony, and was also attended by Dr. Siale ‘Akau’ola, CEO for Ministry of Health, Town Officers of Hihifo District, Hihifo Water Supply Committee and Representatives from the Fua’amotu and Ha’alalo Government Primary Schools.

H.E. Mr. Tetsuya Ishii stated that “The Embassy attaches importance to good health for everyone, access to clean and plentiful water, and the empowerment of communities through education.” He added that the GGP’s main objective is to directly meet the various needs of communities with a prompt approach.

Appreciating Japan’s assistance Hon. Tevita Lavemaau expressed gratitude and emphasized the timely assistance of Japan’s GGP which reached 290 projects in Tonga, particularly in upgrading some of the affected schools after Cyclone Gita in February 2018. On behalf of the recipient communities, Mr. Sione Manumanu, Chairperson of Hihifo Water Supply Committee thanked the Ambassador and the people of Japan in addressing the priority needs of their villages to access to a clean and stable water supply.

Japan’s GGP was introduced in 1990 and over 290 projects have been implemented throughout the Kingdom of Tonga. 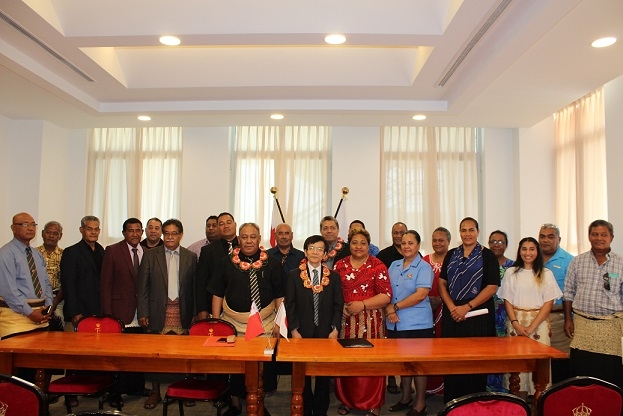 For further information on the project, please click the above.